In part 1 of this series we've created an Xtext project with web integration capabilities. In this part we will take this Xtext web application and turn it into a Vue.js application.

To start the journey, you have to install some additional software:

Furthermore, you should know, that I am using Linux. If you are using Windows, you should take care of any paths used in this Tutorial. Convert them accordingly.

Take a look at the git repository if you get stuck:

Starting With the Frontend

In this chapter I will explain how to set up a new Vue.js project. In the next section I will port the Xtext editor from Eclipse into the newly created Vue project.

If you have no clue what is happening here and you want to learn Vue.js, I recommend searching for a tutorial on YouTube. I've learned it with this tutorial series from freeCodeCamp.org by Cody Seibert. This series creates a full stack web app, including database functionalities. If you complete this tutorial, you definitely know how front- and backend interaction works.

Create an empty project directory. This will, in a second, contain our frontend and later our backend too. Switch into the freshly created directory and run vue create frontend (the last parameter is the project name). This will open the project wizard:

To run the auto generated Vue project, switch into the frontend directory and enter.npm run serve The command line will tell you, where your frontend is hosted.

Visit http://localhost:8080 to check if everything went well so far. You should see the Vue.js default web app.

This tutorial will only give you an overview of the most important components. I encourage you, to take a look at the git repository - branch part_2 - if you get stuck. I placed some helpful comments in there.

Vue.js uses components to build the frontend. The only component you will need so far, is the code editor. In the next steps we will get all the necessary resources from the auto generated Xtext web server, to build such a component.

The *.web/ directory of the Xtext project shows us some of the resources to run the code editor, but not all of them. As soon as you start the Xtext web server, the web server will use web jars, which are web libraries as JAR Files. Start your Xtext web server, as already shown in part 1, and open  http://localhost:8080/webjars/ to have a look at some of the libraries, which are used in the background. Make sure to close the Vue process first, so the used ports do not collide.

To get the code editor up and running in the Vue project, we have to extract these libraries.

In the next step we will put these libraries in the public directory of our Vue project.

One way to get these libraries is to use the wget command line tool.

With the Xtext web server running, open the terminal and enter the following command.

This command will recursively download three directories into your <project>/frontend/public directory of your Vue.js project: xtext, webjars and xtext-resources:

When you change the grammar of your DSL, you have to delete the downloaded xtext-resources directory and rerun the command, to update syntax highlighting within the code editor.

To create a first result, we have to edit/create three files. First we will create a little helper class, to create a communication channel between the index.html and the App.vue.

We start by stealing some code from Alex Taujenis (thanks!). Create <project>/frontend/public/Events.js with the following content:

We continue with the <project>/frontend/public/index.html of the Vue.js project. Below you can see the result after the editing:

Maybe you are wondering what these <%= VARIABLE %> are. Vue.Js is using Webpack to build the project. And these kinds of variables are Webpack placeholders. If you want to learn more about environment variables in Vue.Js, I recommend reading the official documentation.

We define the value of these placeholders in <project>/frontend/.env. Create the .env file:

We use them to define the version numbers of the libraries we've pulled from the Xtext web project. Don't forget to set VUE_APP_DSL_FILE_EXT to match your DSL file extension.

Take a look in the directories of the extracted libraries to figure out which versions you have. These were mine:

Before we continue porting the code editor, we have to store the address of our backend somewhere. We don't have a backend at this point, this is just forethought. Create the directory <project>/frontend/src/services and within that directory create ConnectionData.js. This module will contain the URL of the backend:

Now we can build the editor in the <project>/frontend/App.vue file:

We are done with the editor. If you start your Vue.js frontend with npm run serve, you now should see the editor window, we've already had in the *.web/ project. But at this point, the editor does not show any syntax errors. If you open the developer tools of your browser and watch the network communication, you can see what is happening in the background:

The input is sent to the language server, defined in the window._xtext.createEditor(...) function call in the App.vue file. Unfortunately nobody is answering.

Starting with the Backend

Our frontend is constantly trying to call the (not yet existent) backend. Time to answer these calls, by building one. First we will initialize our backend project. The resulting Node.Js application will act as a reverse proxy for the language server. Later in this series the Node backend will have an actual use case, which is compiling the code. So it must be able to differentiate between two kinds of requests: the one for the language server and the one for itself.

Your current project directory should only contain the Vue.js frontend. In the next step create the backend directory next to it:

Navigate into the backend directory and execute the npm init command. Fill out the questions about your project. Set the entry point to app.js:

Furthermore, we have to install some packages:

After the installation process finishes we have to set up the ESLint config, with the node node_modules/eslint/bin/eslint.js --init command. Answer the questions as shown below:

In the last step of preparing the backend, we have to change some configurations in the backend/package.json file. Edit the scripts section in the following way:

Afterwards prepare your directory in this way:

In the next steps we will do two things:

Our backend has now the information where it can access the language server JAR. Next we will build a module to start the JAR file. Implement the LanguageServerService as shown below:

Take a look at the spawn(...) function call (Line 12). Depending on how you are going to use your project, I would recommend using the  absolute path of your java binary. On Mac and Linux you should be able to figure that out by typing $ which java in the CLI of you system. To use the absolute path is just error prevention, if you plan to auto start your services. Because in some cases there can be problems with the $PATH variable.

The main entry point of the backend process is the src/app.js. In there we will start the backend itself, and we use the prior created LanguageServerService to fire up the language server.
Edit the <project>/backend/src/app.js so it looks like the one down below:

With the src/routes.js we tell the backend how it has to handle different kinds of HTTP requests.

As you can see, we now redirect all calls which requests the /xtext-service/* path, to the language server, which will be running on http://localhost:8090/.

Let's grab the language server from our Xtext project.

The Language Server and Nodemon

Because it makes life easier, we've set up Nodemon to watch our project and restart the backend as soon as it recognizes file changes. This can cause problems, because the language server JAR file we will export, creates log files, e.g. if an error occurs, which would unnecessarily cause restarts of the backend. Let's tell Nodemon, that changes in the language_server/ can be ignored.

Afterwards close and restart your Node backend to reload these configurations.

In the previous chapter we configured our Node.js backend in a way, that every /xtext-service/ request gets forwarded to http://localhost:8090 (which is our language server). So we have to change the port the language server is running on, in our Xtext project. Open *.web/src/*.web/ServerLauncher.xtend and change the port:

To Export the language server,  right click in the Xtext project on the *.web/ project and select Export....

In the first step select Runnable JAR file, in the second step copy the configuration as shown in the image. Choose the prior created <project>/backend/language_server directory, as the destination path. Start the export process by selecting Finish.

With the terminal navigate to your chosen Export destination and run

If everything went well, your terminal should now show you the same messages as the console, when you start the web server within Eclipse.

Bringing It All Together

We reached the state, where we have successfully escaped the eclipse environment and are (more or less) free of choosing the technologies we want to use.

Open two terminals and fire up the Vue.js frontend (top terminal with npm run serve) the Node.js backend (terminal at the bottom with npm run start):

We have learned how web integration in Xtext works and where to configure the backend and frontend.

Furthermore, we have successfully ported the Xtext project into a Vue.js/Node.js project and are now ready to start with a more interesting part: compiling the editor input to JavaScript to run our code in the browser. 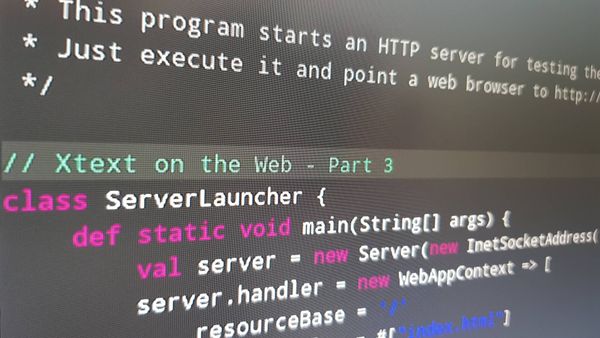 This tutorial series will show you, how you can turn an Xtext project into a web application. In this part we will take the compiler of the Xtext project and will use it to run our DSL in the Browser. 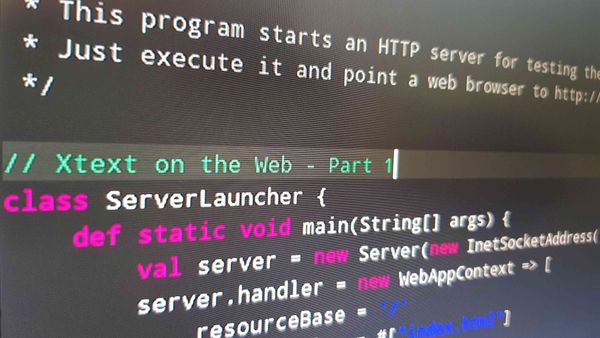 Explaination on how to export the Xtext language server and code generator to build a web application, with which you can present your domain specific language (DSL).